A visit to the Elbphilharmonie is a special experience for all the senses. The music, of course, takes centre stage. In the Grand Hall, this assumes a double meaning: the terraced rows of seats rise up high around the stage in a circle. This creates an extraordinary sense of proximity to the musical action, especially since Yasuhisa Toyota’s acoustics make every note ring out as clear as crystal.

As you make your way around the building, there are amazing views to discover at every turn. This is because the Elbphilharmonie – designed by the Swiss architects Herzog & de Meuron – was built right in the middle of the river Elbe.

A shimmering wave of glass on a solid brick warehouse from the 1960s, and between them a publicly accessible viewing platform that functions as a meeting place and launch pad for discovering the rest of the building: not only the Grand Hall and the Recital Hall, but also the hotel, restaurant and souvenir shop.

The special materials used in the interior design invite you to touch and feel them, especially the acoustic wall panelling in the Grand Hall and the Recital Hall. And hands-on experience is also provided in the Elbphilharmonie »World of Instruments« in the Kaistudios, where musical instruments from around the world await to be played and discovered.

The Laeiszhalle is a distinguished institution and a wonderful venue for early music, song recitals, chamber music and jazz.

When it first opened its doors on 4 June 1908, the Laeiszhalle was Germany’s biggest and most modern concert hall. It’s an important neo-Baroque landmark in Hamburg and a focal point of the city’s musical life.

Besides top international artists, the venue also provides a professional setting with an elegant, familiar atmosphere for Hamburg musicians – with the Symphoniker Hamburg, the Laeiszhalle’s resident orchestra, leading the way.

The programme at the Elbphilharmonie and Laeiszhalle is all about quality, diversity and breaking down genre boundaries. Lively interpretations of classical masterpieces are just as important as the discovery of contemporary music from various cultures – performed by the world’s best artists and the resident orchestras and ensembles of the two halls: the NDR Elbphilharmonie Orchestra, Ensemble Resonanz and Symphoniker Hamburg.

The great stars of jazz are a regular presence here, and they pave the way for the rising stars of the scene. The intensive »Reflektor« mini-festivals, in which exciting artists take charge of the programme and invite their favourite musical friends and colleagues to the Elbphilharmonie, are always a very special experience.

The Elbphilharmonie is a total work of art comprised of breathtaking architecture, excellent acoustics and a unique location. The Swiss architects Herzog & de Meuron breathed new life into the traditional brick base, placing the concert hall on top of it like a glittering crown.

The Elbphilharmonie lifts the spirit and emboldens the senses, enabling you to enjoy new experiences. 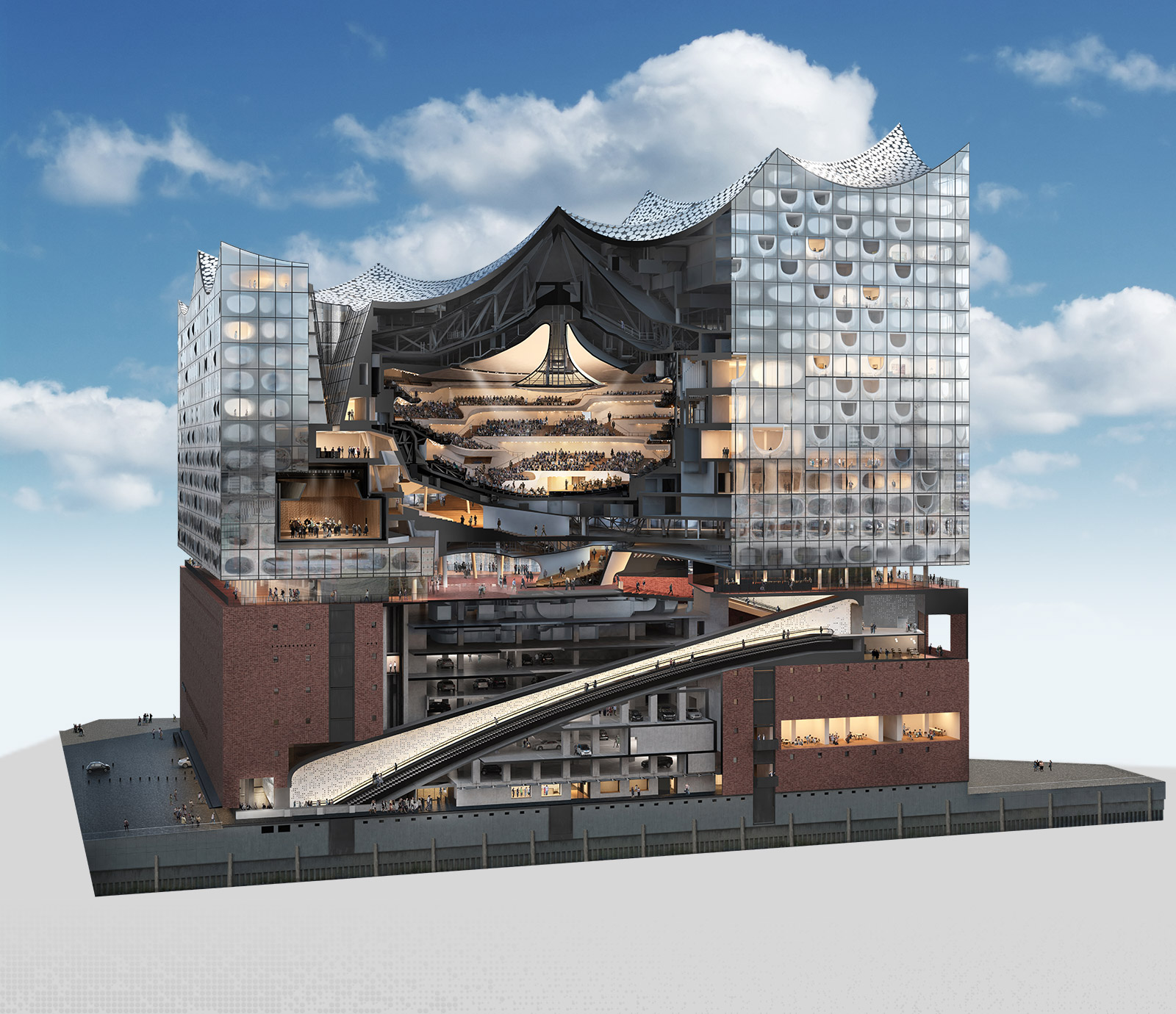 At a height of 37 metres above ground level, this public viewing platform is open all day long. From here, visitors can reach the concert halls, hotel, Elbphilharmonie Shop, Deck and Deli via stairways and lifts. The outer walkway of the Plaza offers visitors a breathtaking panoramic view of the inner city and the harbour.

Learn More About the Elbphilharmonie Plaza

The heart of the Elbphilharmonie: the Grand Hall seats 2,100 guests in the »vineyard« style. The stage for artists and orchestras is situated at the centre of the concert hall and is surrounded by terraced seating. An extensive sound reflector is suspended high above the stage.

The Recital Hall is designed as an intimate, multipurpose space and is ideal for chamber music, lieder and solo recitals, jazz and world music. Equipped with flexible seating and stage elements, the space offers a variety of configurations and seating for up to 550 people.

The Elbphilharmonie’s »World of Instruments« and wide-ranging music education programme are housed in the Kaistudios on floors 2 and 3 of the Elbphilharmonie building. Kaistudio 1 has a capacity of 150 seats and is ideal for experimental music, seminars, workshops and rehearsals.

A wide range of dining options and culinary delights awaits visitors to the Elbphilharmonie. Extending over two floors and easily reached by the Tube escalator, the »Störtebeker Elbphilharmonie Hamburg« includes a restaurant and a shop that offers special events such as beer tastings.

»The Westin Hamburg« hotel is located in the upper east part of the Elbphilharmonie and has 244 guest rooms and suites, a restaurant, bar, spa and event facilities.

More About the Hotel

Forty-five spacious apartments with glass fronts and balconies offer residents spectacular views of the river Elbe, the harbour and the inner city.

»I know that I have done my job as an acoustician well, when audiences no longer perceive the large distance to the music.« :Yasuhisa Toyota

The vineyard-style architecture means that no member of the audience sits further than 30 metres from the conductor in the Grand Hall. The music literally takes centre stage.

The Grand Hall’s wall panelling is called the »white skin«, in reference to the 10,000 plaster fibreboards that make up the surface of the walls and ceiling. It reflects the sound into every corner.

The foyers of the Grand Hall, ranging over many floors, reflect the building’s overall architectural concept: they offer fascinating glimpses into the various levels around the concert hall as well as great views of the port and the city.

The Recital Hall is arranged in the classic shoebox style. The French oak panelling with the gently undulating waves reflects the sound wonderfully into every corner of the space.

This is home to the Elbphilharmonie’s extensive music education programme, with concerts and workshops for all age groups. Pop and jazz concerts are also held in Kaistudio 1.

The Elbphilharmonie as we see it today is the work of architects Jacques Herzog, Pierre de Meuron and Ascan Mergenthaler. Their studio also designed Tate Modern in London, the Allianz Arena in Munich and the Olympic Stadium in Beijing.

The »Tube« is one of the Elbphilharmonie’s architectural highlights: from the main entrance, the 82-meter curved escalator leads up through the old warehouse.

Visitors can enjoy a unique 360° panorama over the port and the city from a height of 37 meters. Whether you’re a Hamburg local or a tourist, a concertgoer or hotel guest, the viewing platform is perfect for a stroll with a view.

Yasuhisa Toyota is one of the world’s most renowned acousticians. Besides the Elbphilharmonie, he was also responsible for Suntory Hall in Tokyo and the Walt Disney Concert Hall in Los Angeles.

Curved and printed facade elements transform the Elbphilharmonie into an enormous crystal that reflects the lights and colours of the sky, the water and the city.

Architecture and music – inseparable in the Elbphilharmonie

An organ for everyone

The Grand Hall organ honours the idea of the Elbphilharmonie as a »concert hall for everyone«: rather than towering high up and out of reach, it is built into and around the terraced rows of seats, and is elegantly integrated into the architecture. Feeling and touching are expressly allowed! The surface of the pipes is coated with a custom-made protective layer to ensure they remain in optimal condition.

The sound of an organ is produced by the air flowing through the pipes. From the organ console, the organist can »pull out« individual stops to switch ranks on or off, producing different timbres. When playing, the organist can choose from several manuals – i.e. keyboards – and sets of pedals, which are played using the feet.

The Elbphilharmonie organ was built by the renowned Bonn-based organ building company Klais, and has 69 stops. There are also four registers integrated into the reflector above the stage.

In addition to the mechanical console located directly in front of the instrument, the Elbphilharmonie’s organ can also be played from a mobile console that is pushed onto the stage for concerts.

The Elbphilharmonie organ is made up of almost 5,000 pipes, varying in length from 11 millimetres to more than 10 metres. Most of the pipes are made of tin: around 400 of them are made of wood, some of which is more than 180 years old, guaranteeing outstanding, long-lasting quality.

From »cutting, smoky« to »bell-like, iridescent«: the tones of the Elbphilharmonie organ are manifold and create a warm sound that fills the Grand Hall. This organ is optimised for music from the 19th century onwards and for the requirements of contemporary music. The Elbphilharmonie’s titular organist is the Latvian star organist Iveta Apkalna.

Find out more about the organ in the Elbphilharmonie Mediatheque: #Organ

One organ – many divisions

A new landmark emerges :Milestones in the Elbphilharmonie’s history

With 19,000 square metres of storage space, the »Kaiserspeicher« at the tip of »Kaiserhöft« is the largest warehouse in the port.

The City of Hamburg takes the decision to blow up the ruins of the badly damaged Kaiserspeicher. A new warehouse is erected on the site. Like its predecessor, the new Kaispeicher A is geared to storing goods such as cocoa, tobacco and tea.

The warehouse has been standing empty since the 1990s. In 2003, Hamburg project developer Alexander Gérard commissions architects Herzog & de Meuron to design a new concert hall on top of the old Kaispeicher. On 2 April 2007, the foundation stone is laid.

Out of the gutted Kaispeicher A, the Elbphilharmonie grows a further 17 floors. In 2010, the last level is added: the 25th floor. The installation of the innovative glass facade begins on the ninth floor.

In 2013, after months of building freeze, the Elbphilharmonie partners sign a reassignment agreement. From this point on, the internal construction makes advances: the first panels of the »white skin« are installed in the Grand Hall.

On 31 January 2014, five fitters attach the last of the 1,100 glass elements to the edge of the rolling rooftop. This concludes the construction of the facade, and the exterior of the Elbphilharmonie is now complete.

The Plaza opens to the public on 4 November 2016, two months ahead of the Grand Opening of the concert hall. The Plaza’s extensive deck creates a new public space for Hamburg.

The inauguration of the Elbphilharmonie is celebrated on 11 January 2017. This momentous event is attended by German Chancellor Angela Merkel and numerous other guests from the worlds of culture and politics.

Login required. If you do not have an Elbphilharmonie customer account, registering is quick and easy.