Most European music lovers actually know the Arabic word for wood, even if they aren't aware of it: »oud«.  The Arabic word for wood as a material is also the name of the short-necked lute, which has been the predominant instrument in the Near East and in North Africa for over a thousand years. In its native region, it is known as »the princess of musical instruments«, comparable in status to the violin in Western music. The Arabs who conquered Spain in the 10th century, and later the returning crusaders, brought the oud to Europe, where it evolved into the different types of lute that had their heyday in the Renaissance and Baroque eras. (Our word »lute« is derived from the Arabic »al-Oud«.) But thanks to the growing interest in so-called World Music, the original instrument is once again in vogue in our part of the world too.

The oud was originally designed to accompany singing.

The Emancipation of an Accompanying Instrument

But before this could happen, the traditional role of the oud had to take a significant step forward: for all its tonal variety, it was designed for the longest time to accompany singing. The Iraqi virtuoso Munir Bashir (1930-1997) was the first musician to show with his extensive solo improvisations what potential the oud possessed, and he enjoyed worldwide success in the process. As paradoxical as it may sound, it was only this emancipation of the oud that enabled three brothers from Palestine to pull off a true musical surprise in 2005: Samir, Wissam and Adnan Joubran (born respectively in 1973, 1983 and 1985) were the first artists to play the newly-discovered solo instrument as a trio – a minor sensation in the world of Arab music.

Joubran: A Family for the Oud

The Joubrans come from a musical family in Nazareth. With a respected instrument-maker as their father and a mother who sang professionally, it was obvious what career the three brothers would pursue: »It was always Father's wish for our eldest brother Samir to play the oud,« says Adnan, the youngest of the three. »Samir studied in Cairo and that made him dream of opening doors for the oud that had hitherto been closed to it in Palestine.« In the 1990s, Adnan was already one of the best oud soloists in the Arab world. »It was clear,« Adnan goes on, »that one of us should carry on the tradition of instrument making in the fourth generation, and Wissam was chosen for the role.« Wissam made his first oud when he was only five, and later the perfectionist became the first Arab student to enrol at the Stradivarius Institute in Cremona.

Adnan originally wanted to do what all youngest brothers want to do: something completely different. »I did my best to distance myself and tried to pursue my passion for the cinema. But one time when my brothers were out of the house, I crept up to Wissam's oud and tried to improvise on it. And even though I had never held the instrument in my hands before, and never wanted to either, I found I could do it.« Adnan was just 16 at the time, but only two years later he was appearing on stage alongside his brothers.

We were the very first trio of oud players, and that made it a huge cultural challenge.

»We were the very first trio of oud players, and that made it a huge cultural challenge,« says Adnan, and cites clearly their source of inspiration: it was »Friday Night in San Francisco«, the famous live recording of a concert given in December 1980 by the three guitar virtuosos Paco de Lucía, John McLaughlin and Al Di Meola. »My brothers played this album to me, and it made us all start dreaming.« The outcome of their dreams was the Joubran Trio's debut album, »Randana« (2005). Several factors made the album a surprise hit: in addition to what was a totally new line-up for Arab music, the music rubs shoulders with jazz and flamenco, the three soloists display a breathtaking level of virtuosity, and the communication comes close to mind-reading.

The Singing is Predominant

The great innovator of oud music, Munir Baschir, had already cautiously incorporated European and Middle Eastern influences into Arab music. And this is the direction that Adnan sees for the Joubran Trio: »It represents a fundamental change in the Oriental concept of music, where to this day the singer has the dominant role. But many other oud players are also working towards a purely instrumental music, among them Anouar Brahem, Rabih Abou- Khalil and Dhafer Youssef.«

Inspiration and colleague alike: the oud virtuoso Anouar Brahem can also be heard at the Elbphilharmonie.

The artists Adnan Joubran mentions are all innovators who have a strong affinity to jazz, as he does himself. His greatest idols are pianist Keith Jarrett and crossover flamenco guitarist Paco de Lucía, while his brother Wissam is influenced by the Egyptian oud player, composer and singer Abdel Wahab; Samir in turn takes his inspiration from traditional Arab vocal music. »We all listen to a wide variety of music: jazz, tango, pop, classical music both Western and Eastern … We find inspiration in every genre.«

In the Joubrans' case, strong family ties and the fact that they are firmly rooted in their own culture ensure that their music never sounds interchangeable. »We used to all live in the same house, we travelled together, heard the same noise, saw the same surroundings outside – obviously we were able to read one another's personalities. And at the outset, our musical training was similar as well. In this way we evolved great understanding for each other, a sound instinct and feeling for each other's heartbeat,« says Adnan. »Today our relationship is so stable that we can live in different cities, have our own families, and still harmonise perfectly when we get together for a concert or in a recording studio.«

This is an excerpt from an article of the Elbphilharmonie Magazine (01/2019). The magazine is published three times annually in German only. Order the current issue

You can grasp the suffering in Palestine in your hands. Making music here also means bringing a little joy into people's lives.

This message was expressed in the poetry of Palestinian writer Mahmoud Darwish (1941–2008), from which the titles of the compositions are taken. According to Adnan, Darwish wanted »to tell the world of industry and power that we are human, and our humanity should be preserved«. One of the pieces for example, »Carry the Earth«, is dedicated to four children who were shot by Israeli troops while they were playing football on Gaza beach. The world of »The Long March« in turn is elegiac and muted, but not without hope: »You can grasp the suffering in Palestine in your hands. Making music here also means bringing a little joy into people's lives.«

Asked whether the trio also has political influence as an ensemble with an international reputation, Adnan answers: »We don't belong to any political party, nor do we have a particular political standpoint. The situation in Palestine is a humanitarian catastrophe. And we are the voice of the catastrophe – louder than the voices of those who cry out in Palestine, but remain unheard. We leave it up to the people who hear our stories to take a stand or take action … and we hope that the stand they adopt will be a human one.«

Trio Joubran at the Elbphilharmonie 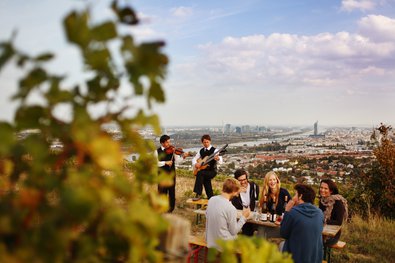