The Music Inside Each of Us

»What effect does music have on us?« – A choirmaster, a neurologist and a music therapist provide some answers.

Music plays on the entire keyboard of human emotions: it exudes energy, euphoria and sadness. Music gives us goosebumps, unleashes healing powers and releases endorphins. Music connects us. Every one of us has music inside him. The author and passionate music lover Roger Willemsen once said, »I am defenceless when listening to music.«

Exactly what effect does music have on the human body, on the mind and soul? This question can be looked at from different angles. In the interview extracts below, three experts from different fields try to find answers based on their own professional experience. They aim to find a strictly scientific explanation on how the brain processes music, in terms of cultural history or of music's therapeutic uses, and of course from the point of view of practising musicians.

Tim Günther works as a church musician at the Church of St. Stephani in Bremen. For him, there is something ubiquitous about music. »Everyone has some connection to music,« he says. »We all have special music that accompanies us through life.« There is nothing that has such a strong hold on us as music does. Lovers talk about »our song«; they recall the music from the dance course or the music that was played at their wedding.

American pianist Craig Taborn describes the magical and inexplicable effect of musical creativity as an »interaction with metaphysical powers«. The audience at the Elbphilharmonie’s »Lux aeterna« festival had a chance to hear the magical power of his music for themselves, when Craig Taborn gave a solo recital at the Laeiszhalle.

Video: Craig Taborn talks about his programme at the Laeiszhalle.

When a piece of music touches the emotions especially strongly, the so-called chill effect occurs.

Music as an Emotional Communication System

Musician and neurologist Eckart Altenmüller of the Musikhochschule Hannover has done scientific research into the influence of music on the human psyche. He believes that music is genetically embedded in human beings, and talks of a primeval emotional communication system that came into being even before the emergence of language. The vocal techniques used by Early Man to express elemental feelings, such as groaning, laughing or shrieking, are also basic patterns in music, he says. »Today, of course, all this has become highly refined and culturally distorted,« claims the music physiologist, who has also done research on the goosebump phenomenon.

»When a piece of music touches the emotions especially strongly, the so-called chill effect occurs. This applies in particular to sad music that the listener already knows or at moments where something alters unexpectedly in the musical structure,« Altenmüller explains. For instance, when a voice emerges from the background, or when the tempo changes.

Altenmüller sees basic moods like happiness or sadness as universals in music, which are played either »fast and at a high frequency«, or with low, rough sounds and slow rhythms.

Music as a Centre of Experience and Refuge

Eckart Altenmüller sees a value in music as centre of experience and refuge for our feelings – especially in connection with personality development. »Our personality determines which music we tend to prefer. Even eight- or nine-year-old children can already put themselves in a specific mood using music.«

Andrè Klinkenstein, director of the Berlin Institute for Music Therapy, says that people cannot distance themselves from music. »We always find music somehow, it never leaves us cold.« One reason for this, he says, is that an embryo can already detect musical stimuli in the 13th to 14th week of pregnancy. Klinkenstein, himself a musician, sees an analogy between people's physical characteristics, especially those of the mother, and basic musical structures.

»The heartbeat as metre, movements made by the mother as rhythm, body fluids like blood as harmony and the voice as melody« is his description of this »pre-natal musical space«.

The same piece of music that makes us happy today may well make us sad tomorrow.

»Music Itself Doesn't Do Anything«

In regulative music therapy, Klinkenstein and his colleagues confront their patients with music that they generally haven't heard before. The aim is to take down the person's internal defences, prompting him to admit unpleasant feelings and thus make treatment feasible.

»Music is a strong force that places a wide variety of emotional demands on us,« declares Klinkenstein. However, he adds, reproducible results and fixed therapy targets as with pharmaceuticals cannot be achieved using music.

»The same piece of music that makes us happy today may well make us sad tomorrow,« claims the therapist. »The music itself doesn't do anything. We allow it to affect our soul, or not.« 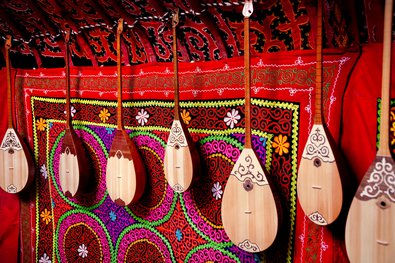