Anoushka Shankar: A Citizen of the World with Roots

How the sitar player found her way between India and the pulsating cities of Europe.

An Indian and a citizen of the world; a virtuoso classical musician and songwriter; someone with deep roots – but also a global approach: Anoushka Shankar has many faces. In the early 21st century there is hardly any other musical personality who bridges the gap between different continents and genres with such elegance and fascination. In this respect, she takes up the baton from her father Ravi Shankar, who was her first guiding star on the sitar – but nonetheless follows quite different paths:

I owe so much to the tradition I’ve learned musically from my father, but on a personal level, not because of expectations that people have. He had a different set of guidelines for himself, which was that even when he was being creative he was always working within Indian classical music. Today is a very different age with more of a two-way dialogue happening between musical styles. We’re not only putting other instrumentations and styles into Indian classical music, we’re taking Indian elements and taking them out as well.

Anoushka Shankar was born in 1981; she is a cosmopolitan individual and a digital native. She clothes the globalised world of the 21th century in music. »I was also been brought up in the West my entire live with a kind of secondary home in India«, she clarifies. »I received a very straight classical Indian grounding through my father but it was predominantly happening in the West. Like people who have grown up with that mix of culture I try to reconcile the differences in my life and make sense of that through my art.«

Her potential for innovation already came to light when she appeared on stage alongside her father Ravi as a teenager. It was completely natural for her in the family tradition to adopt her instrument, the North Indian sitar; the sitar is a long-necked lute with 21 strings, and probably the most prominent instrument in Hindustani classical music.

But at the same time, Anoushka also followed paths of her own: She continued to attach importance to tricky melodic runs in her playing, but parallel to this she developed a special fondness for the sitar's low register, supplemented by effective rhythms in the right hand. Thus the personal style evolved that marks her playing to this day.

I have the greatest of respect for every culture, so I don't want to use any of them as mere trimming for my own music.

After releasing her first works in the Indian classical mode, on the albums that followed Anoushka Shankar went on to extend the facets of her music in just about every stylistic direction imaginable. »I have the greatest of respect for every culture, so I don't want to use any of them as mere trimming for my own music«.

When I do crossover music I try to retain as much of the Indian side as possible and stay respectful to the mood of the Raga, and when I enter the other tradition I have always in mind to giving it the same quality of respect. And I think it’s very different to make a choice in the course of creating a new and different piece of music than not knowing what you’re doing. At first there has to be a lot of understanding.

Her projects of the last fifteen years show Anoushka Shankar to be a global artist in the truest sense of the word, from musical cooperations with pop stars like Sting or her half-sister Norah Jones to albums made with Andalusian Flamenco ensembles or with London DJs and producers of electronic music. And this enormous range is reflected in the list of artists and musical companions that she has invited to take part in her »Reflektor« weekend at the Elbphilharmonie. 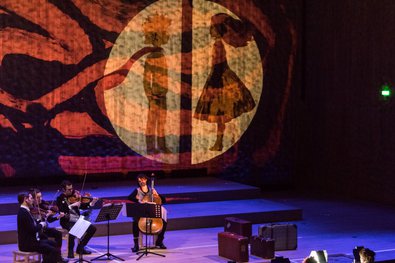